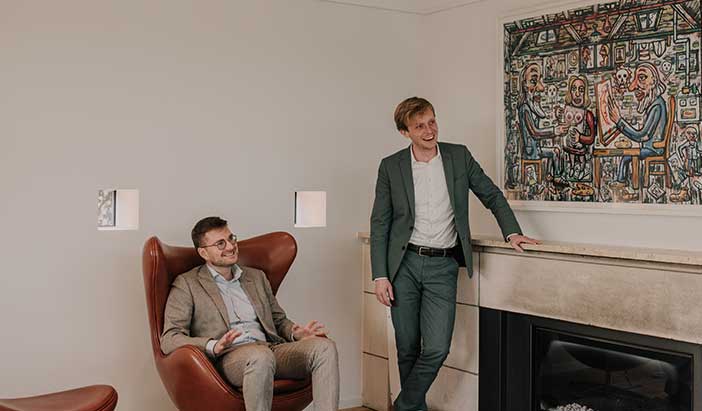 In today's digitalization storm, many companies no longer see the wood for the trees. They know they are becoming more and more dependent on technology, but how do you make a choice? What role does user friendliness play? And how come Amazon hasn't wiped out Bol.com in the Low Countries? Dieter Dreesen, Head of Commercial Professional Services and Managing Partner Thomas Van Oekelen of Antwerp-based Pàu explain.

"Providing solutions in an over-demanded and over-analyzed IT market," is how Dreesen describes Pàu's activities in one sentence. Admittedly, that doesn't say very much yet. "Mostly we work on solutions that frame a digital transformation," adds Van Oekelen. "Depending on the type of organization, this is done at different levels. Sometimes we do pure knowledge sharing and consultancy, sometimes we set up a managed service, other times we build an app or a website. And we do that for both startups and established companies, who are currently seeing their business change at lightning speed. Sometimes also for companies that are already at an advanced stage of development but are still looking for very specific knowledge around, for example, design or digital strategy."

At Pàu they see that many competitors are strongly committed to a specific technology. Dreesen is not a fan of this. "For example, they let everything run on Microsoft tools. Or everything is programmed in Java. Technology is only a means to an end. Our idea is that technology must above all be user-friendly. That attitude should ultimately determine which solutions you deploy."

Those solutions are also not uniform for every sector, says Van Oekelen. Allthough we are only in the preliminary stages of the wave of digitization, it is not moving at the same speed for every company. "The media, for example, are in the rush hour. They had to start experimenting with websites years ago, then apps and mobile technology. Banks too: first you had web banking, then mobile banking and now banks are launching apps where you can do much more than just transfer money. That ranges from buying parking tickets and movie tickets to watching soccer clips. That can certainly work, but the focus has to be on the end user. That's where you make the difference."

The fact that you can watch soccer in a banking app, for example, shows that the possibilities for investing in technology have become endless these days, says Van Oekelen. "Many companies realize that they have to do something, but don't know exactly what. The main key to that question seems to me to be your end customer. What is his problem that you want to solve? What's on his top of mind? That determines whether you are going to build an app, a chatbot, a website or VR application. Otherwise, you're going to make hefty investments for nothing. And this philosophy applies both to companies that want to continue using their existing legacy technology and to companies that want to bring completely new business models to the market. That added value for the customer is indispensable."

What also plays a role in this is that the profile of that customer is changing and that, for example, his or her age helps determine how he or she wants to use technology. "Absolutely," agrees Dreesen. "Ease of use largely coincides with changing behavior. Let me give an example: nowadays customers want to do as much as possible themselves. Calling a help desk or customer service to check certain account details or change a delivery address, for example? Not a single eighteen year old wants to do that. At best, they want to arrange this via Whatsapp. And in the future, they would probably prefer to do this with a chatbot. Eventually they will even handle their complete banking business with voice messages.

"This doesn't only apply to consumers, by the way, but just as much in a B2B environment," says Van Oekelen. "We are building a customer portal for Warehouses De Pauw where the end user can streamline their own administration and communication. This allows their customers to monitor their own invoices, but also, for example, the energy consumption of the warehouses. You see, you would think that 'warehouse rental' is not a digital sector, but WDP also has to deal with it to remain internationally relevant."

Following up on all these developments also means that you have to dare to open up as a company these days, says Dreesen. "Companies used to be very strongly personal: Apple was Steve Jobs, Microsoft was Bill Gates. I think that's gradually disappearing. As a business leader you have to focus much more on co-creation and sharing information. Innovating all on your own is almost impossible anymore because today's world has become so complex. And making that world a bit simpler and more accessible for your customers is not an easy job."

What is also clear, is that this evolution is unlikely to change for the years to come. Digital technology will become even more prominent in business operations, and developments will accelerate. "Take 5G for example," says Dreesen. "Belgium is not exactly a frontrunner in 5G, but that technology is going to open up new possibilities in an enormous number of areas. It will be perfectly possible for a surgeon in, say Ireland, to operate a robot that is performing surgery on a patient in a Belgian hospital via data connection. Or take everything in terms of selfdriving technology: if cars start driving autonomously and mobility becomes a service, 99 percent of our parking problems will be solved automatically." Truly, exciting times lie ahead. Curious how VRT helps its users get more enjoyment out of its TV and radio content by flipping the focus on the customer? Read about how we incorporated UX design to make VRT more customer-centric But back to that "user friendliness" that Dreesen was talking about. What exactly is that? And how do you get there? "Often user experience design is confused with the color of your buttons or making pretty screens," says Van Oekelen. "That's part of it, but it's much more than that. It's about how well you can put yourself in the mindset of your user. How does a user interact with your app, not just when they're sitting on the couch at home, but when they want to make a transfer, say, on the bus? And that goes a long way, mind you. Ultimately, as a company you want to develop a far reaching empathy for the world of your customers, a kind of mental connection with your user. Before you throw yourself into an expensive and lengthy development process, these are things that you absolutely must know."

Very often, companies also think they understand their customers, but they don't. "When we start to investigate that, it can sometimes be very confronting," laughs Van Oekelen. "For example, a classic example is the checkout flow of a website. Why is it that customers put things in their basket, but ultimately do not checkout and pay? Sometimes that has to do with nothing more than the order of certain buttons and screens. Small things, but if you don't know, you do miss a lot of sales."

"Often companies also confuse what is technically possible and what is technically desirable," Dreesen adds. "Is it necessary for the remote control of a TV set to have sixty buttons? I estimate that at least 99.99 percent of end users are not interested in whether a certain tool is programmed in, say, Java. They mainly want something that is user-friendly. And if you can't do that, one day you'll run into a competitor who raises the bar in terms of user friendliness and starts poaching customers." 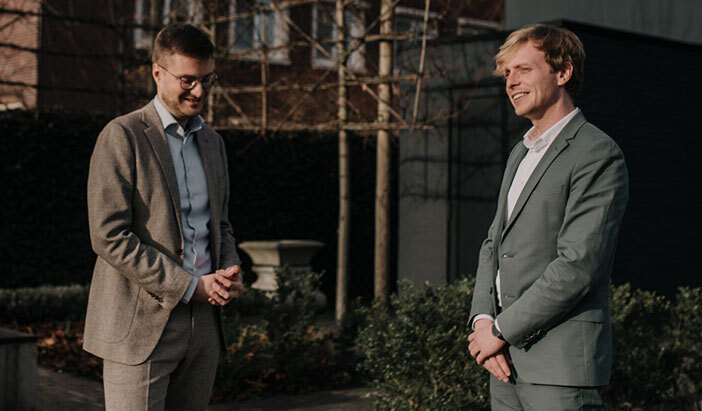 A site from here

Van Oekelen agrees, but also points to parameters even beyond the technological. "I think local elements also play their part," he says. "In roughly all of Europe, Amazon is the juggernaut among ecommerce sites, except in Belgium and the Netherlands, where it's Bol.com. Why is that? Because Bol.com understands that usability, absolutely, but also because they've invested in understanding local customers, in Belgians and Dutch, that is. From the language to the way the site is structured, to the payment methods you can use, to the helpdesk... You feel in everything that Bol.com is a site "from here". I don't have that feeling with Amazon."

This need to "understand the customer" will continue to play a role in the future, Van Oekelen believes, regardless of how sites evolve technologically. "Also when you start using artificial intelligence or machine learning, that plays into it. That even goes down to the semantic level: do you let your chatbot address customers with "you" or with "your"? You will have to make that choice at some point."

"Legal and social evolutions, for example, also play their part," says Dreesen. "A new law like PSD II turns the entire banking landscape upside down. Or take the whole fuss about parcel carriers. In the future, will it still be done to choose the fastest courier or will customers want a transport company that thinks in a much more ethical and sustainable way? You're never done with such thinking. Any change in the world can have a huge impact on the user's perception."

What can Pàu do for you?

Would you like to learn more about how UX research can boost your innovation process?

We help people imagine, design, and build the best digital products for a better world!
PEOPLE FIRST.
GET IN TOUCH WITH THIERRY

Become a part of our team!

We love some fresh talent. Apply now and tell us why you should be a part of our team! 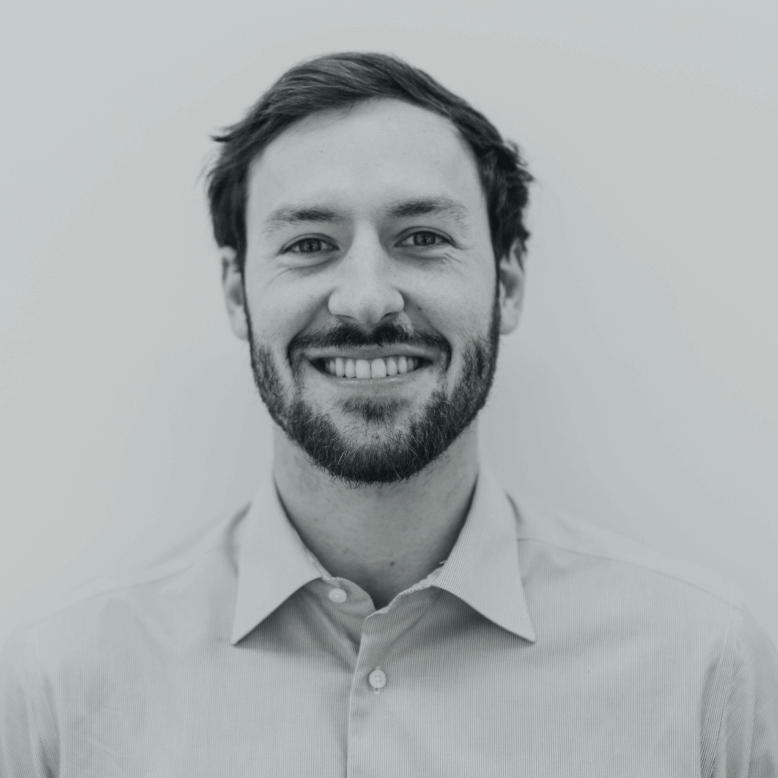